Exeter School recently came back from a fantastic cricket tour to Dubai over the Autumn half-term, organised by inspiresport. We had an action-packed itinerary over 6 days, which included 5 cricket matches and some unforgettable sightseeing. Some of our matches were played under lights and we had the opportunity to play a variety of formats. Our excursion highlights included a tour to the top of the Burj Khalifa [world’s tallest building] and a breath-taking desert safari with dinner at the Bedounin Campsite. Added to that, we stayed in a fantastic hotel in the heart of Dubai. Tour Captain, James Horler adds, “The cricket was a fantastic experience, 5 games in searing heat and under floodlights was a once in a lifetime opportunity. Playing on amazing grounds with backdrops you would never get in the UK made the cricket 10 times better and to play great cricket against some good quality sides topped it off. Aside from the cricket, a trip to Wild Wadi waterpark was extremely enjoyable, especially cooling off from the heat!” 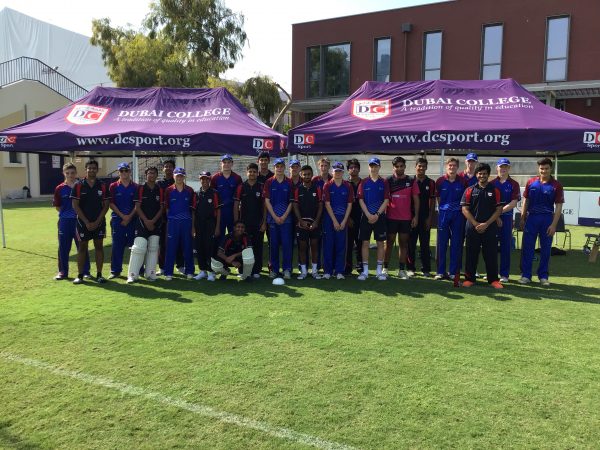 Congratulations to the Inspiresport U15 One Day Cup Finalists:

The ESCA side, Manager, Coaches and Officials assembled at Lords on Monday 3rd September for the practice nets, prior to booking into the Danubius Hotel.  The weather was fine and warm, with the forecast for the match being good – no rain!

We joined the MCC for a very pleasant evening and good food.  Dr Dave joined us, giving an inspirational speech – before handing out the cricket shirts.  An excellent evening ended with one and all retiring to bed.  A busy and challenging day lay ahead.  Tuesday Match day dawned with some cloud, but due to clear by lunch time.  The MCC won the toss to invite ESCA to bat.  We would have to bat well as conditions favoured the bowlers.

Josh de Caires the Captain opened the ESCA batting with Robin Das.  Josh settled in well and Robin Das opened quite brightly before falling for 19.  Smeed and Wijeratne fell early with the score at 92 – 4.  Josh de Caires fell for 49.  He had played a vuluable anchor role.  Joey Evison had also played a valuable role being scored a fine 38.  ESCA would need to dig in and consolidate.  I think we did that in spades.  What followed was an outstanding record breaking unbeaten stand before Harry Duke and Luke Doneathy.

There was some wonderful stroke play from both players, some quite cheeky forwards at the end of the innings.  Luke completed a magnificent century with Harry playing his part with 60 not out.  An unbeaten century from Luke as the ESCA innings ended on 304-5.  The wickets were shared amongst the MCC bowlers.  We now see what MCC had to offer.  I suspect a lot.

Fernandes and King batted well and quickly for an opening stand of 52.  Harry Sullivan and Luke Doneathy curbed the run rate.  MCC wickets then fell steadily losing their seventh wicket for 160.  An ESCA victory seemed imminent.  What followed was almost a repeat of the ESCA innings.

What followed was the presentations outside the Pavilion hosted by Lord McClaurin.  It was great to see Jos Buttler making a presentation.

The Dinner in the Long Room was and always is a privilege much enjoyed by the players and a very happy Manager.

Our thanks are due to the MCC for allowing this match to take place.  I know the players enjoy the privilege of playing at Lords.

My thanks are due to Edward, Kate , Luisa and Peter (Who looks after us in the dressing room).

Hopefully here’s to next year.

Tonbridge School are the winners of this year’s ESCA One Day Cup Final.  Congratulations!

Whitgift School are the winners of the David English Final 2018.  Congratulations!